Needless to say, we love sharwarma wraps. If we see a Shawarma sign, we are most likely to try it. Here, my husband and I list the shawarma places in Bacolod City that we have tried. But I have updated the list and deleted those that have closed.

Some are popular, some are not. Some we like, some we don’t. Next time, you crave shawarma wraps, you know where to get your fix. hehe 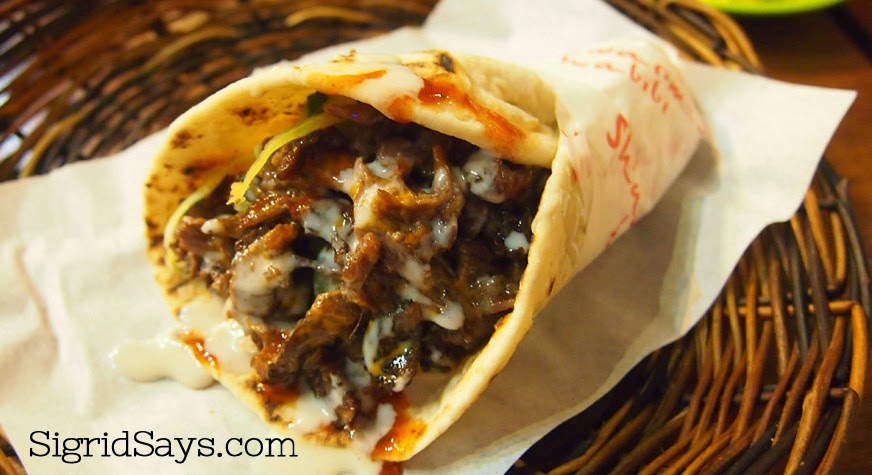 Shawarma “is an Arabic meat preparation, where lamb, chicken, turkey, beef, veal, or mixed meats are placed on a spit (commonly a vertical spit in restaurants), and may be grilled for as long as a day. Shavings are cut off the block of meat for serving, and the remainder of the block of meat is kept heated on the rotating spit.

“Although it can be served in shavings on a plate (generally with accompaniments), shawarma also refers to a sandwich or wrap made with shawarma meat. Shawarma is usually eaten with tabbouleh, fattoush, taboon bread, tomato, and cucumber. Toppings include tahini, hummus, pickled turnips and amba. It is similar to Turkish doner kebab and Greek gyros.” Source: wikipedia

My husband and I agree that this is our top choice here in Bacolod City. Affordable at P75 for a large order, we both prefer the taste of the beef and the sauces. One order is quite filling, as it has lots of beef. Available at their branches at Hi-Strip 4 (Circumferential Road), Gaisano City, 888 Chinatown Premier, and at Lacson Street. They also sell milk tea.

You would wonder where Crem Shawarma is. It is not located in a mall. In fact, it is a little food cart that is always situated at the back gate of St. John’s Institute so most of its patrons are Hua Ming students. And since their clientele are students, their shawarma (Large-P59, Mini-P39) and shawarma rice (P59) are very affordable.

Hubby and I like the taste and if we want to satisfy our shawarma craving, we can easily come here because it is near our house. When we went there to take this photo, a couple tried their products. They turned out to be potential investors who were convincing the owner to open up shop in Iloilo. They had the shawarma rice and and overheard them say that it was really good.

Perhaps the longest-serving Shawarma stall in Bacolod City, Leylam shawarma seems to be the most popular choice of Bacolodnons. Since they have branches at SM City Bacolod, Robinsons Place Bacolod, and other big stores, most people’s exposure to shawarma would only be at Leylam’s. Their orders are pretty affordable, too.

However, the filling is very little and we don’t like the bread that they are using–it’s too toasted and crispy. But they have maintained the sauce and there are really times that I crave for that taste.

A couple of years ago, I tried Shawarma ni Kulas at their branch at La Salle Avenue. I remember that at that time, hubby and I raved about their shawarma. I remember that the wrap was “stuffed”. And it tasted pretty good, too, though the sauce is different that what we are used to. I just didn’t bring our daughter back then when I went inside because this restaurant has a thing for toilet humor and vandalism, something that I would really have a hard time explaining to my kid.

But for the sake of this article, we went to their branch at 16th-Lacson St. so that I can take a photo. I was disappointed. They no longer use the beef tips that we are so used to having with our shawarma. Instead, they used ground beef, so the texture is not the same. The taste is just so-so.

But well, many people frequent the place, probably because they are already known and their place is very accessible (they have another branch in the south at Araneta St, Singcang). And yeah, they have maintained their toilet humor, too. So if you haven’t been to their stores, just don’t be surprised if there are undies hanging behind the counter, the menu board is filled with names of dishes with double meanings, and they have a toilet bowl for their wash area. :p

Pretty good shawarma here at the Homesitte Shawarma, located at Homesite, Bacolod City. But what is exciting is their eat-all-you-can shawarma for P169. We took the challenge but hubby and I were disappointed to finish only 3 for me and 4 for him. haha This is only available from 1pm-4pm daily. They are open for lunch, snacks, and dinner. Mobile: (0922) 860-2459.

So if you also enjoy shawarma wraps like us, do try out these different choices. And if you have shawarma that we haven’t tried yet, do let us know. Thanks!

P.S. Even some of our favorite superheroes love shawarma wraps. Watch this Avengers shawarma video clip. After saving the world, they got tired and hungry and ate shawarma. haha