Chicken Deli is a unique brand and taste. It is the only one of its kind of Bacolod Chicken Inasal among the different Bacolod restaurants specializing in chicken inasal.

At 34 years old, Chicken Deli is already an institution in Bacolod City. It’s building at 8th-Lacson Streets, Bacolod City, Negros Occidental, Philippines is already a landmark where many Bacolod and Negrense families have made memories through the years. And I am one of them who has made a lot of memories there, whether with friends or family, especially during my younger years.

But after 34 years, Chicken Deli is no longer just a Bacolod brand. They now have more than 50 branches nationwide. Some are company owned while others are already franchises. Yes, they are open for franchising!

Chicken Deli celebrated their 34th year last 26, 2017 and here in Bacolod City, it was marked with such revelry. All the Chicken Deli Bacolod restaurants held a promo that brought the house down — Bacolod chicken inasal paa with rice for only P34! The promo ran from 10am t0 12nn, and of course, people already started lining up very early to avail of this amazing offer!

The regular paa with rice meal is P114, so this is huge treat. It was for dine-in only and good for one meal per person. But it was still a great promo nonetheless.

I say that Chicken Deli’s inasal is the only one of its kind because it does not taste like the usual inasal of Bacolod. Also, if you are a keen observer, you will notice that the skin of their inasal is not burned. That is because, while it is grilled over charcoal, they have a fan that continues to blow the smoke and fire out. The cooking, therefore, is evened out.

At Chicken Deli, they have what they call the FIESTA SALO-SALO MEALS priced from P759 to P809, which are good for four to five persons. This will save you a great deal, as this is a set promo meal. There were three of us so we had the Set meal A, which included a big bowl of Pork sinigang, 4 sticks of Pechopak with rice, Kangkong with Garlic, six pieces of Banana Turon, and four Regular Drinks. You can just take out the excess food .

Chicken Deli also showed us their new and improved menu. So aside from the usual Bacolod chicken inasal pechopack (breast and wing) and paa (leg), you can have so much more there. This is makes them now an all-around Filipino restaurant. Plus, this homegrown Bacolod restaurant has the UNLI-RICE option–a hit among chicken inasal with rice lovers. Check out below some of the things that you might enjoy at Chicken Deli.

Chicken Deli is open all day so they have many snack items to choose from, such chicken burger, spaghetti, batchoy, pancit canton, pancit luglug, dinuguan, turon, halo-halo, and many more.

The SM Bacolod Restaurant of Chicken Deli is newly renovated. While the brand of Chicken Deli has retained its colors of yellow and red, the design is funkier and with Instagrammable walls. 😀 It’s much welcoming for the younger crowd. 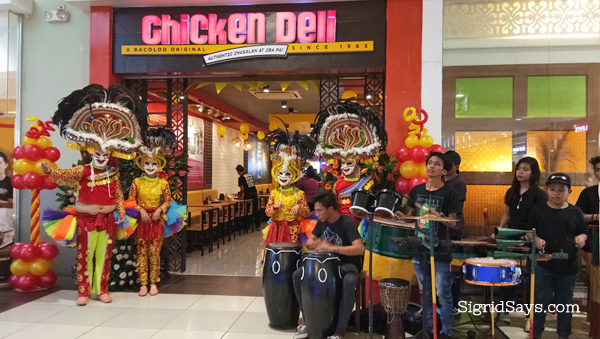