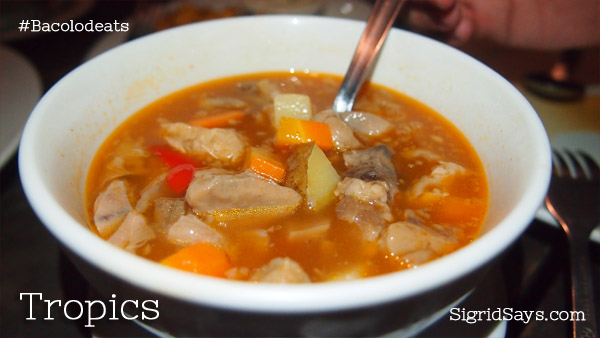 Soup No. 5 in Bacolod is a stew made of beef parts, innards, and of course, the infamous bull testicles and organs that are enough to keep its mention a hush-hush or is enough to merit a giggle among some in the female species. The soup is supposed to be an aphrodisiac that can enhance a man’s virility and strength. And whether the purpose is for intimacy or just mere hard work, many men eat this because it powers them up. Plus, it tastes good, is filling, and cheap, too. For a big bowl at P50 plus rice or bread, it will surely get you going throughout the day.

But for me, it is a soup that I like not really for whatever it’s supposed to do but really for the taste. It is beef soup, so it’s more like nilagang baka but with the chunky chewy parts of whatever innards the cook decides to put in there. Eventually, hubby and I realized that unlike nilaga, not all Soup No. 5 are the same. Each eatery has its own interpretation and the appreciation really depends upon the taste of the one who partakes.

In our case, we have made it our quest to find the best Soup No. 5 in Bacolod. This list is far from complete and I will add more as I go along–if I discover something new. But so far, we already found the best taste for us. Don’t ask me if they are healthy or clean, if they have MSG or high in cholesterol. We all know that comforting foods are mostly not healthy, right? So just eat in moderation and enjoy the experience. hehe

If you know a place that serves good Soup No. 5 that we haven’t
covered yet, please let us know in the comments so that we can try them, too.
— Dennis and Sigrid

Soup No. 5 in Bacolod

I bet many people don’t know where Tropics is. It’s a big eatery/watering hole behind the Caltex station across the Bombo Radyo office at Lacson St. Mandalagan. Outside, it doesn’t look much. But inside is a wide non-aircon area for people who have night lives. They serve good food actually, at very affordable prices I may add, and one of them is their Soup No. 5. We were introduced to this place by owners of Fogo Grill, Rey John and Mia Asparin.

By far, for us, this is the best Soup No. 5 we have ever tried. It has lots of meaty stuff, has thick soup, flavorful, and you can really taste the spicy, beefy goodness. And most of all, you can really find the testicles in the soup, which is really the purpose of Soup No. 5. I believe you can only visit them from sundown to sunrise and they are open daily.

Our second bet is Zharnss Grill. For P50, you will be serve a big but rather shallow bowl of steaming Soup No. 5 but I think that is already enough. You can smell, taste, and feel the beefy goodness without the signature “panghe” or “anghit” of the cow. Plus, it is made up mostly of bull organs and beef parts that I never knew existed. Yeah, you can chew on them and the texture is different almost every time. Zharnss Grill is located at the back of Goldenfield Commercial Complex, along the road where Aboy’s is also located. They are open 24 hours.

Julian’s Dels primarily sells batchoy and siomai during weekdays. Soup No. 5 is only available during Sundays. And no, I did not misspell their name. Their soup is very meaty but it has a different flavor. From just how it looks, it is already reminiscent of callos and that’s exactly how it tastes. And it very well should because out of the three bowls that we ordered (P50/bowl), I didn’t encounter testicles but rather tripe and innards and vegetables that you can normally find in callos. It’s pretty good if you are looking for callos, and sans the chorizo and olives, it’s very affordable. You can very well buy here, take it home, add chorizo and olives, and you could pass it up as callos. But as Soup No. 5, it’s not the taste we are looking for. Julian’s Dels is located along Inyong Yulo Avenue, a wee bit further going south from Sugarlandia Barquillos.

Triple J Food Corner – 2 spoons
We visited Triple J along Circumferential Road at Bata Subd., near Pepsi. It is a very big eatery with lots of dishes on their turo-turo counter that look so good. They have I think 3 or different soups, like nilaga, tinola, and of course, Soup No. 5. Their soup is thick and comforting and tastes a bit spicy good, too, but it’s kinda sweet and there’s not much meat going around. Their bowl is smaller, too, but of course, their soup is also cheaper at P40. As you can see in the picture, it is literally “soup”.

Will add more Soup No. 5 versions that we will encounter in the future. – Sigrid

3 thoughts on “Quest for the Best Soup No. 5 in Bacolod”