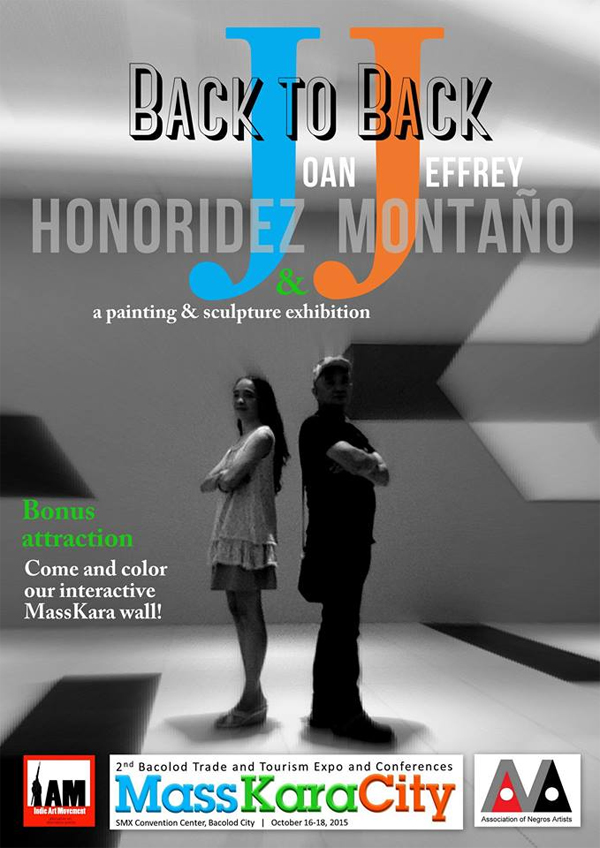 Two known Bacolod artists are staging a back to back exhibit featuring select paintings and sculptures from their collection. Dubbed J and J Back to Back, the event will showcase the works of Joan Honoridez, better known as Joan of Art in art circles, and sculptor Jeffrey Montaño. It will be held at the lobby of SMX Convention Center at the third floor of SM City Bacolod from October 16-18, 2015. Formal opening will be at 10am of October 16, to coincide with the MassKara City exhibit opening.

About the Artists
Joan Honoridez and Jeffrey Montaño have been comrades in art since 2007 when they joined the Art Association of Bacolod about the same time. They consider themselves “batch mates” when they officially started their respective careers in art–Joan in painting while Jeffrey dabbled in wood sculpture.

Over the years they have joined countless art exhibitions not only in Bacolod but also in Manila and other places.

Since then, both have evolved in their chosen field in the visual arts and have also been very active in their artistic contributions to the art world that have made Bacolod City proud. Currently, they are heading the Association of Negros Artists, as they continue to encourage young artists or those new in the field to showcase their art in various venues for more opportunities and exposure.

This month of October, the two artists have launched several group exhibitions involving artists of different ages. To top it all off, they are holding this back to back exhibition at SMX Convention Center. This is Joan’s solo show for painting and Jeffrey’s solo for sculpture.

Interactive Event during the Exhibit
As a sidelight to the event, there will be a 4′ x 10′ canvas set against a panel with a giant mask and MassKara dancers design as the basic “string” for a tangled design to be made by Joan on the spot and for the public to color in. So everybody is invited to please come to their exhibition, take part, and be inspired.