The District North Point held its Arts Fair last weekend and they had several activities for local artists and those who love art. Perhaps the biggest event is the Mural Painting Contest to produce “Instagrammable Walls” at the mall.

Seven artist groups participated. They formed groups of up to five artists in order to join. They came up with their own concepts and were allotted different spaces at the malls. Six of them painted on walls while one worked on the floor near the pet park. All paints were provided for by the major sponsor, Davies.

After the two-day work, the group that emerged the winner was made up of members of the Association of Negros Artists (ANA). They painted shelves of books containing real titles, working on the pre-existing conditions of the wall, which are horizontal lines.

Founding president Joan Honoridez describes their work as “large-scale portraits juxtaposed with fantasy and doodled creations. The plan was to put our little girl model in front of a graffiti backdrop. (But) we twisted our concept a little bit to play with the wall feature. It had deep, uniform horizontal lines that look like shelves– bookshelves! So we decided to paint rows and rows of books, (with) some of the imaginary creatures coming alive. Also, the air vent is incorporated into the mural design as a book as well, placed on top of another big book above the girl’s head.”

Their muse is an art student of one of the painters and founding members, Mache Belangel-De La Torre. The student looked pretty much like Frida Kahlo, with her distinct knit brows and sweet and dreamy look, like little girls in their daydreams. With all their ideas, Honoridez says that, “The final challenge was really how to make five diverse minds come to agree and harmonize all our ideas into one piece.” And their work was declared champion.

The 1st runner up is the lone painter, Anika Marie Loquite, with her dainty storybook-like mural. She is also a member of ANA.

Another competition was the body painting and members of ANA also won the grand prize. The members of the winning group are Wen Quilisadio, Hannah Mari Patoc, John Quiamco, and Franz Menente. 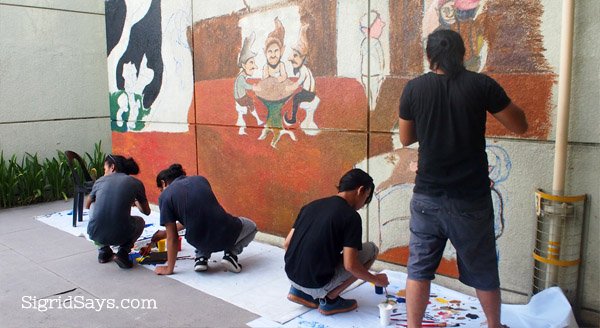 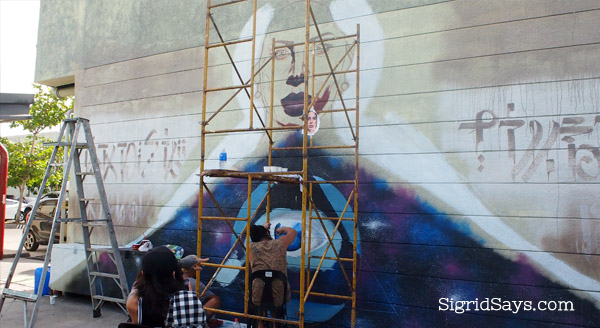