Brewery Gastropub Bacolod is a great place for family dinners and bonding moments with friends.

When we hear the word “pub”, we often associate it with beers and hard drinks. Sometimes, it is associated with intoxicated banter and generally rowdy behavior. But if you attach the prefix “gastro”, you will immediately think that it is a good place to eat. It is where you have drinks pairing that will make your experience ultimately epicurean. Like Brewery Gastropub Bacolod.

For the first time, my husband and I brought our little girls for dinner at Brewery Gastropub Bacolod. It is located at the ground floor of Paseo Verde, Lacson Street, Mandalagan, Bacolod City. The place is well-lighted, predominantly lined with wood, barrels arranged around the place.

You get the pub vibe alright, but none of the stuff that you want your kids to be censored from. The kids got inside this Bacolod restaurant first. When I went in, they excitedly ran to me, showing me a lollipop stand.  They can freely get what they want–compliments of the resto.

Brewery Gastropub Bacolod is the newest of its kind to open in Bacolod City. It’s first successful venture is in Iloilo City, which is now three years old. In Cebu, they opened another branch only last week. The well thought out concept of the place came from Chef Pauline Banusing of Iloilo City.

Chef Pauline is a sought-after caterer with several restaurants that feather her cap. Al Dente, Freska Hometown Buffet, Farm to Table, and of course, Brewery Gastropub Iloilo and Cebu are all hers. Her formal education in the culinary arts include the Professional Chef Series at the Culinary Institute of America, the Master Class in Cooking at The New School-Manhattan, and Food Styling Classes at the Institute of Culinary Education. These schools are all in New York, USA, hence her exposure.

Moreover, Chef Pauline also gets a lot of inspiration from the food and culture that she has encountered in her many travels. The food styling lessons have surely translated to artistically presented dishes at the Brewery. Each dish is definitely Instagrammable.

When you visit the place, you will be mesmerized at their extensive menu that caters to different tastes. They have many kinds of seafood, pork, chicken, and beef dishes for meals or pica-pica with your drinks. Part of their service at Brewery Gastropub is beer or wine pairing. When you order something, they will find you a drink that would best go with your food.

The food styling lessons have surely translated to artistically presented dishes at the Brewery–all Instagrammable.

Just so you know, the Brewery is home to many craft beers. They now have 128 kinds of bottled and nine kinds of handcrafted beers in draft. These are made both in the Philippines or imported from abroad. They also have more than 40 kinds of single malts and popular liquors from around the world.

And, management says, the list continues to grow. They are also the first to serve Italian Merlot wine by the draft, already chilled to just the right temperature.

I am not a beer drinker, but I got to sample two very popular imported beers from the draft. These are Hoegaarden and Stella Artois. Their taste both settled well with me. But to choose between the two, I prefer the Hoegaarden. Not only do I find their taste delightful, they are smooth. Moreoever, I found light on the tummy, even after a heavy meal.

They staff of Brewery Gastropub Bacolod really know what to suggest. They gave a mild beer to someone with virgin tastes such as me. That way, I was able to enjoy my beer.

Their Italian Merlot wine draft is just beside the bar. It’s enjoyable to watch your favorite wine on draft. I wanna take it home! hahaha Just imagine this by your bedside. Ahhhh…hahahaha I can only imagine…. *wink* Happy hour every hour.

So again, the Brewery Gastropub Bacolod is not just about drinks. They are also about beautiful dishes that taste as lovely as they look.

One of their bestselling appetizers is the Salted Egg Hand-cut Potato Fries It is sooo good. I know that salted egg potato chips are the rave right now, but you just have to try this. And after about an hour and a half after it was served, there were a few pieces left in our bucket. I ate them and they are still crispy. Must try!

I also asked the chef if she can have them packed so that she can sell them in stores. hihi I am sure it will be well accepted by the market.

Another great appetizer or pica-pica would be the Chicharong Bulaklak with Pork Floss. Nice!

Just go slow on the Pork Floss and Chicharon Bulaklak. hihi I also love the Beer Battered Tempura Soft Shell Crab, one memorable item for me. It’s the crab dish where you get to eat everything. But it’s not always available. It depends upon the supply.

They have several salads on the menu. The one below, I think, is the prettiest.

Brewery Gastropub Pub Bacolod also serves pizzas. These are the German equivalent called the flammkuchen a.k.a. tarte flambee . I forgot what kind of flour they use, but the result is soft pizza that you can roll.

Here are some of the main courses served to us. And honestly, they all deserve the attention–both in taste and presentation. This relatively new Bacolod restaurant knows how to please. 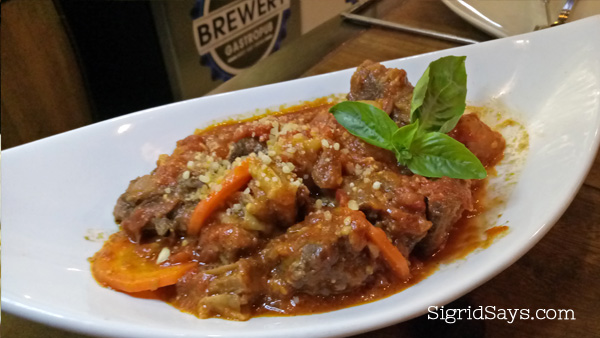 French style beef brisket (P275) with carrots and potatoes. I so lovveeee this. It has just the right sweetness and acidity that is pleasant on the palate. This is one of the dishes that left an imprint on me and makes me drool when I think of it. Beef is very tender, too.

Where is Brewery Gastropub Bacolod located?

If you are a Bacolodnon who loves good food and drinks, this place is for you. Don’t miss dining here and exploring the many drinks that make your meals more exciting. If you are just visiting, this is one Bacolod restaurant that you need to drop by.

So what are you going to order?

Note: Prices are subject to change.