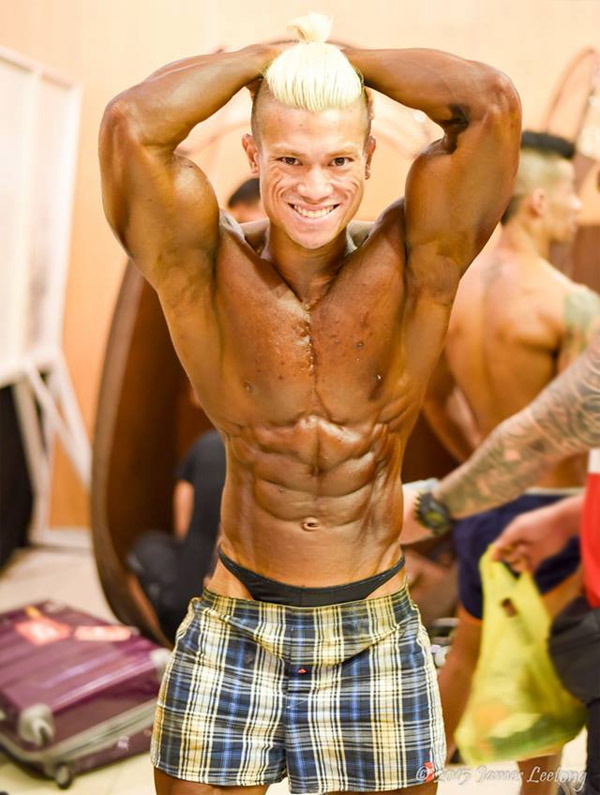 I met Marty Laoang a couple of years ago through the Bacolod Exotic Animal Keepers (BEAK) association, of which he is a member, during their show at Robinsons Place Bacolod where my daughter Dindin carried a huge python with him on stage and their photo ended up on Visayan Daily Star.

Since then, I would see Marty posting pictures of his developments on Facebook as he works hard in a Bacolod gym to reach his goal and make his physique competition-worthy. At that time, he was already bulked up, but he was totally unlike now–ripped, shredded, and whatever else you would call it.

Marty, who is now 24, started out with a lanky silhouette, weighing only 120 lbs at half an inch shy of 5’9″ in 2008. Then he started working out. Right now, seven years later, he has packed on the muscles and of course the poundage at an average of 190 lbs per weigh in.

Although Marty finished nursing in college in 2012, he already worked as a fitness trainer in 2011 even while he was studying. For him, fitness and bodybuilding is his lifestyle so he intends to keep on doing it while he can and also help others train the same. To maintain his form, he works out five to six times per week at 1.5 hours per day. And if there is a competition coming up, he goes two trips to the gym and doubles his working time and reps. Yes, he is serious at what he does and when he trains, he is focused. Here is Bacolod, he does not go to a single gym alone. He “gym hops”, as he calls it, and rotates his time between Eclipse, President’s, Silay Fitness Center, and Jaks Fitness Hub. When he is not busy working out, he unwinds with friends on a food trip or takes care of his exotic pets at home.

Aside from bodybuilding, Marty is also training others to reach their fitness goals. He learned his skills merely from seven years of experience, self study, and research. And his background in nursing studying the human body surely helped him, too.

Marty mostly plans his meals but he does have a Manila-based coach who checks on him and also modifies his diet “for more accurate calculations when it comes to carbs, protein, and sodium intake.”

Marty’s Bodybuilding Awards
All his hard work would be for naught if not for the competitions that he has joined and won. Marty was named the 2013 Mr. Silay Bodybuilding champion and the 2013 Asia Pacific 2013 Novice champion. In the same year, he won 2nd place in the Asia Pacific 2013 Athletic competition. Then he went to become the Clash of Titans 3 (Negros Title) 2014 Champion. Eventually, he started joining bigger competitions and at the Phil-Asia International 2014, he ranked 5th in the Open Class. He also placed 4th in the Gemmalyn Crosby Sports Festival 2014 Open Class. He then placed 2nd in the Mr. Philippines 2015 Physique Tall category. This year, he is working on competing this November 2015 for the Mr. Olympia Amateurs title in Hong Kong, which is a world title event, where he will represent the country.

“Behind this shredded state of mine is pure hard work, patience, and tons of effort done over and over and over again more than you could’ve imagined.” ~ Marty Laoang

For Marty, “bodybuilding is a lifestyle and most likely the hardest sport in the world. Unlike any other sport, once training is over you can live a normal life outside. In bodybuilding its a 24/7 sport. You train inside the gym and face the entire day of dieting, isolating from the real world, and cutting almost all of your social life in order to reach your goal. My best advice would be for newbies would be CONSISTENCY and PURE DETERMINATION. Honestly, it’s not easy and it takes a lot of heart to be a bodybuilder. It’s not just about physical strength–it also involves mental strength.” In terms of supplements, Marty recommends whey protein, mass gainer, casein, and BCAA’s for those who are just starting in the field.

Aside from winning the November event, Marty hopes to earn the International Federation of BodyBuilding & Fitness (IFBB) Pro Card someday, which elevates him in the leagues of Arnold Schwarzenegger and Lou Ferigno.

If you need to train with Marty or to purchase some of the bodybuilding supplies that he sells, contact him through: